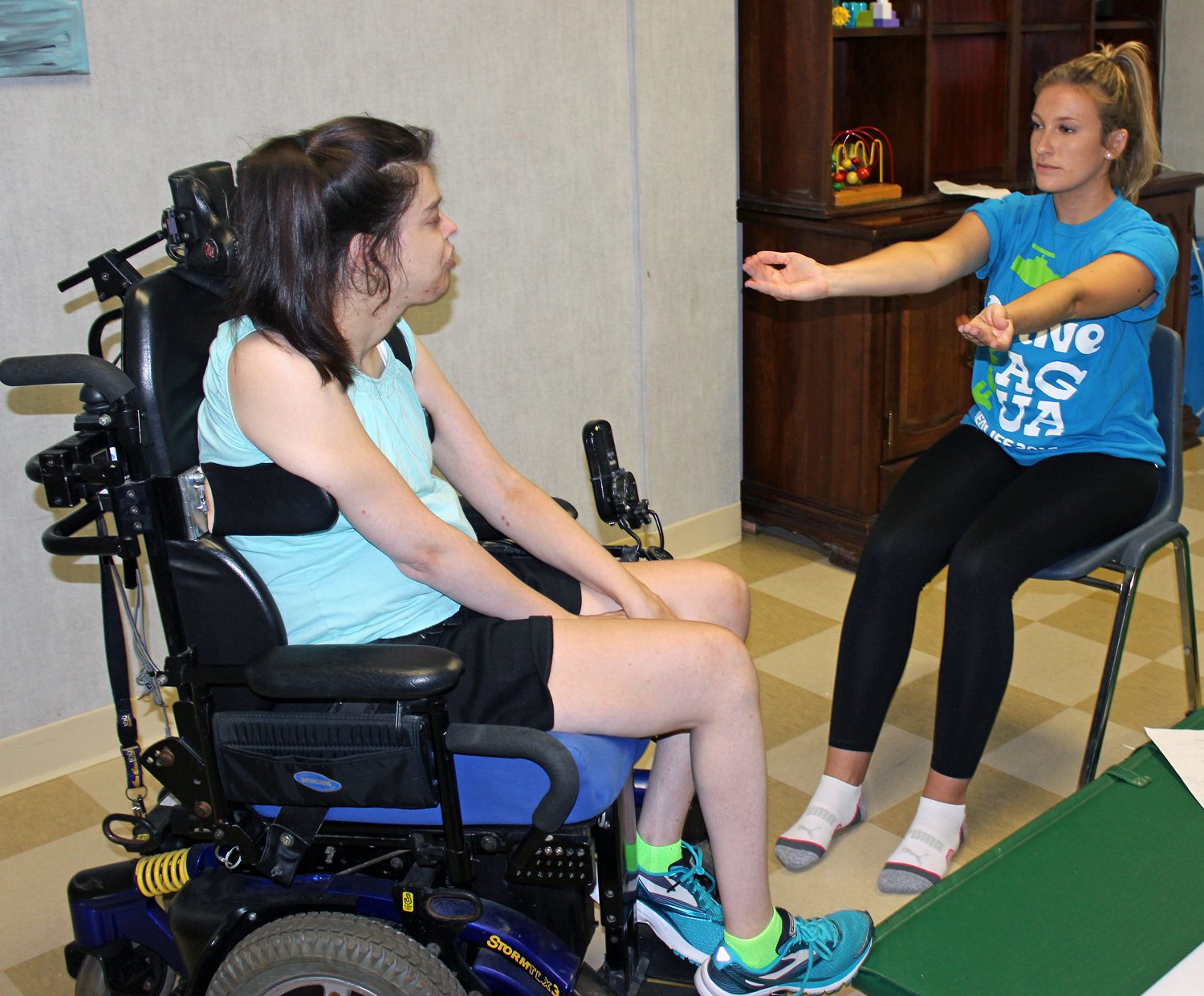 “It’s nice to see them relax and just reflect on their day,” said Haley who has been coming to Rise’s Bloomington facility about twice a week since early June. “It was challenging at first, but with each session, I get to know people better and our communication improves. People seem to enjoy it more and more, and I think they find our yoga sessions meaningful.”

As a member of her high school dance team, Haley began practicing yoga several years ago to help her stay strong and flexible. She took up hot yoga during college and usually practices that form.

Many people who attend Haley’s class have significant physical and intellectual disabilities so adapting yoga positions and stretches can be challenging. Team members from Rise’s Creative Partnership South sit in on the yoga class to provide any support or assistance Haley and the yogis may need. They also offer some guidance to help Haley better understand what might work best for each participant.

“It’s fun to be creative with yoga and people have really responded well to it,” Haley noted. “I try to come up with new poses to add to our practice each time and adapt poses for people who are in a seated position, concentrating mostly on their arms, shoulders and head.

“For instance, every time Alex comes, I can tell he’s really giving it his all,” Haley continued. “Even with his limited physical capabilities, he tries hard to follow the flow and seems to get a lot out of it.”

The number of people attending her yoga class varies each time, depending on what is going on in the day training and habilitation program. “But I can see that the more often people come, the more they enjoy it and find it meaningful. That’s exciting for me.”

Haley graduated from Holy Family High School in Chanhassen and earned her undergrad degree in genetics and Spanish from the University of Wisconsin-Madison. She is applying to several medical schools nationwide and hopes to start her doctoral studies in 2019.

She previously worked as a medical scribe in a Fairview Hospital emergency room. She also volunteered in a hospital pediatrics ward, spending one-on-one time with kids reading, playing games, and talking with them.

Haley found the volunteer positions at Rise online. “I told Zoe (Leonard-Monrad, Rise’s volunteer coordinator) that I was willing to do whatever she needed me to do. I thought it sounded like an awesome opportunity.” She also volunteers with Rise’s Art Speaks program and assists Art Therapist Stacy Gross with customized, interesting art projects.

“Haley’s been a phenomenal addition to our team in Bloomington and has brought many new experiences to the people we serve,” said Program Manager Jordan Reisdorph. “She’s truly a natural at working with the people we support and has spent quality time getting to know each person individually in class so that she can better assist them in learning yoga based on their learning style and physical abilities. Haley tweaks her lessons to accommodate individuals in wheelchairs.”

“We had been looking for a yoga instructor volunteer for some time so we were excited that Haley was willing to bring her background and experience to Rise programs,” added Zoe. “After hearing about Haley’s work, program managers from other sites have been interested having in yoga/fitness volunteers at their locations, too.”

“I really want to give back to the community and help people,” said Haley who also volunteers at a homeless shelter and Loaves & Fishes. “These interesting and exciting experiences give me good ways to do that.”