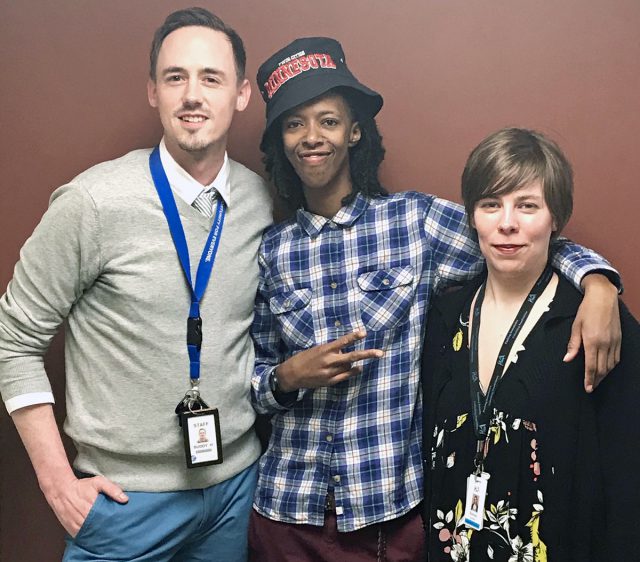 Even though her favorite Ohio State Buckeyes were not vying for a NCAA basketball championship at US Bank Stadium in Minneapolis this March, Ubah Mohamud was nonetheless thrilled to be working for Whelan Event Staffing at the Final Four games.

In addition to that coveted job assignment, Ubah also worked at the opening game at the brand new Allianz Field in St. Paul for the Minnesota United soccer team. And with the Minnesota Twins baseball season in full swing, she will likely be working at Target Field this summer.

Hard to imagine, then, that only 18 months ago she was unemployed, homeless, and dealing with chemical dependency issues.

Originally from Somalia, Ubah’s father moved his family to Columbus, Ohio, to give them a better life when she was six years old. She relocated to the Twin Cities in 2015. Without a place of her own, Ubah found herself sleeping in parking garages, stairways, or anywhere she could be relatively safe and out of the elements.

Now 27, Ubah has developed keen survival skills and ‘street smarts.’ She eventually made her way to Catholic Charities where she met Buddy Heino, a housing case manager, who helped her find stable housing in South Minneapolis in August 2018.

Buddy referred her to Employment Consultant Rowan Radcliffe who works with Rise’s Pathways to Success program for career planning and job placement services. Pathways is funded by a grant from Hennepin County.

Ubah was in treatment for six months, got a sponsor through AA, and began in earnest to put her life back together. She met with Rowan regularly to help formulate a career plan, develop a job resume, and begin looking for a good job.

“Rowan and Buddy were so much help to me,” said Ubah. “They helped me tap into resources that I didn’t know anything about and figure out what my next steps were going to be – how I was going to get from Point A to Point B. Rowan got me a bus card so I could get to my appointments and interviews, and a copy of my Green Card. She helped me get job interviews and work clothing from Michael’s Closet at Rise, and good work shoes.”

Ironically, even with all that job development support from Rowan, Ubah found the job with Whelan on her own. Ubah applies for local special sporting and social events online, and works different events about 20 hours each week.

She said she enjoys helping people who are excited to be at these special events. Ubah gets many compliments and her managers note that she is a role model for her co-workers.
“I am really grateful for my life today, but I know I didn’t do this on my own.

“It’s been day by day, step by step. I owe so much to Buddy and Rowan for helping and supporting me. I now know that anyone can do anything they believe in. Rise is a good name for the company because that’s what it helps people do.”

Ubah is currently working on finishing her GED. She attends Regular Adult Basic Education classes at Hubbs Center for Lifelong Learning in St. Paul and is also attending classes to get a low-pressure boiler license. Eventually, she would like a full-time job in customer service.

Rowan is happy to be on “Team Ubah,” as she calls it. “She’s doing it – she’s a shining example of someone who has overcome huge barriers, but is willing to work hard to go after what she wants and is not going to settle for less. It is so gratifying to see her doing well.”

“Ubah has been a constant inspiration for me,” said Buddy. “She fights for what she believes in and does not take ‘no’ for an answer. Over the past year, I have seen Ubah flourish as she builds a solid foundation for her future, something she is and should be proud of. I admire all her work and dedication!”

“I used to feel worthless,” Ubah admitted. “But Minnesota helped make me a better person. I don’t want to be dependent on the government – I want to pay my own way. Today people who know me, respect me for what I have accomplished. I know I am going to go places. I know my own worth.”