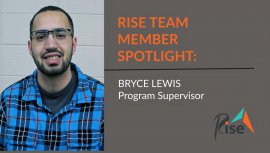 In the midst of the COVID-19 crisis, Rise team members have had to adjust their daily work routines to meet the new needs of the people they serve, Rise, and our business associates.

Bryce Lewis was one of those Rise team members who stepped up to fill a specific need. After being promoted to a program supervisor at Rise Spring Lake Park, Bryce found himself back in his original DSP (direct support professional) role to lead a team of nine people who are working on the paint lines at nVent in Anoka.

Bryce said that his team of nine people are all happy to still be working during the pandemic outbreak; other Rise team members were also reassigned to fill in for people who chose not to work during the pandemic. With its still-high production demands, nVent managers appreciate Rise meeting their needs.

A few years ago, Bryce was in search of a new employment opportunity in which he could benefit others. He has a family friend who has autism and was drawn to Rise’s important mission. More than three years later, Bryce is happy that he has established a meaningful and rewarding career and feels he is making a difference in the lives of people who have disabilities.

Bryce began working at Rise as a DSP in 2016, and after a brief one-and-a-half years, was promoted to his current position as a program supervisor in September of 2018. In this role, Bryce uses his positive and calm attitude to supervise within internal community-based training and employment (CBTE) program at Rise Spring Lake Park. He oversees three DSPs, and together they support an average of 50 people who have brain injuries, mental health and cognitive challenges working in transitional and extended employment.  Bryce is one of two supervisors at the CBTE Spring Lake Park program and he never hesitates to step in and help support DSPs and person served not on his caseload when his counterpart is not available.

Bryce and his team continue to ensure that the services they provide are person-centered and consistent with people’s individual choices and goals. In his normal position, Bryce also assists the DSPs on the work floor with set-up, inventory, production, and quality control.

As is true with most jobs, Bryce’s work isn’t done until the paperwork is finished. He is responsible for each person’s annual review and goal-setting which is conducted with their support team, including family, county case managers, and others.

Collaborative by nature, Bryce was working for Rise has been great. “I enjoy Rise and meeting people, especially the people we serve.”

Outside of work, Bryce enjoys spending time with family and friends, as well as fishing at his family cabin, and watching football and basketball.

Thank you, Bryce, for bringing your passion to Rise!