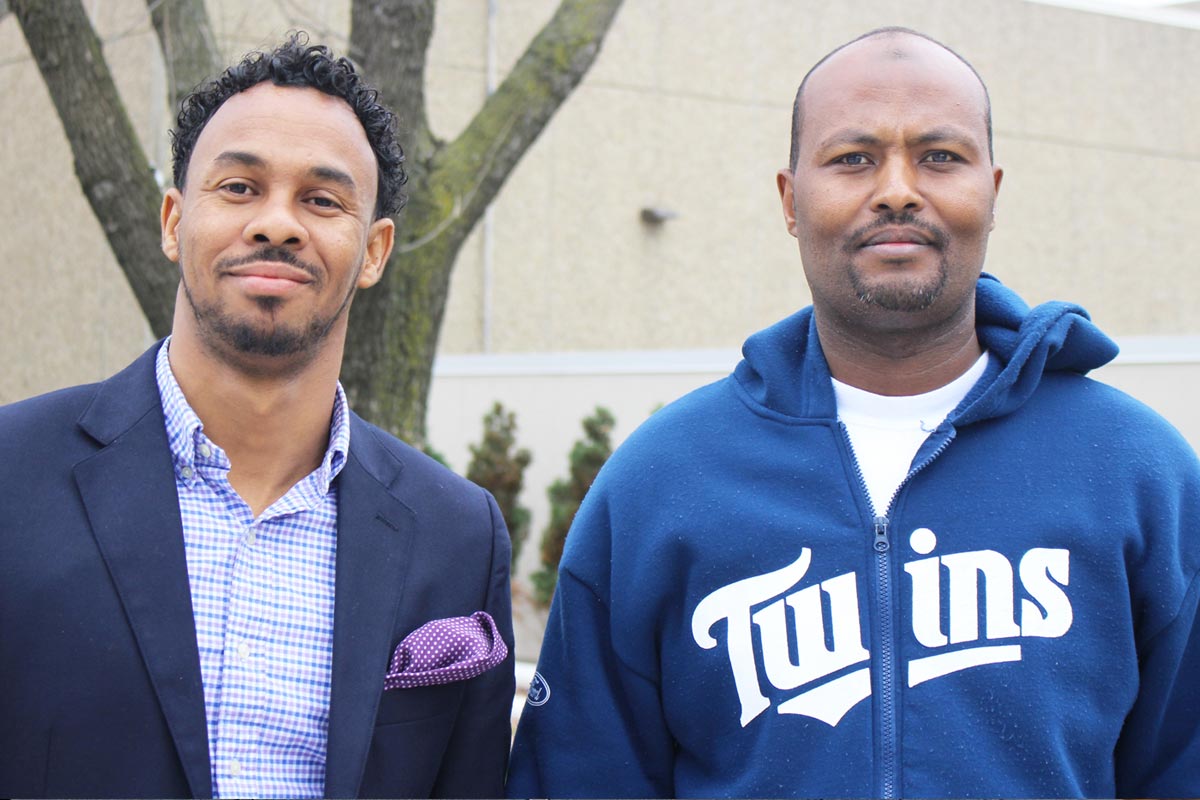 WHEN NATOLI BULGA moved his family almost 8,000 miles from Ethiopia to Minnesota, his hopes were high and his dreams were big. He knew the transition to this new life would be challenging, but Natoli felt his family’s future would be brighter in the United States.

Knowing that having a good job was key to the family’s survival and assimilation into American culture, Natoli went to Rise’s Pathways program in South Minneapolis for career planning and job placement services. In meeting with Employment Counselor Mohamed Daher (shown here, left), Natoli was able to best determine how he could put his skills to work.

In the past year, Mohamed has assisted more than 30 refugees and immigrants in their job search. More than half of them have found employment at LSG Sky Chefs. Located at the Minneapolis-St. Paul International Airport (MSP), it the world’s largest airline catering company. Serving all airlines flying in and out of MSP, people work in a wide range of positions, including sanitation, assembling and packaging food trays, and loading food carts onto planes.

LSG Sky Chefs has strict security policies, requiring background checks and fingerprinting of its applicants, but the company has a welcoming and supportive approach to hiring people who have a strong work ethic and are motivated to do well and advance their careers.

“It’s a tough labor market right now,” said LSG Sky Chefs Recruiter Jessica Schermerhorn. “I appreciate working with Rise because their placement specialists introduce us to people who are serious about working, have great skills, and have already identified the kind of work they want to do.”

Natoli transfers the assembled food carts from LSG Sky Chefs’ warehouse and loads them into the planes. “It’s a good job,” he said with Mohamed translating for him. “I have many friends working there and I hope to work there for a long time.”

“Once on the job, people seem to love it here,” Jessica added. “Many refer friends and family to work here. We currently have people speaking 16 languages, but communication doesn’t seem to be a problem because everyone supports each other. We have the best people in the world helping each other.”

LSG Sky Chefs offers an Academy of Learning through which people can hone their work skills as well as enhance their language skills, learn computer programs and basic math – even work on getting their driver’s license. These additional skills all help people advance in their careers at LSG Sky Chefs.

Generally, LSG Sky Chefs employees work a number of shifts around the clock. Recognizing transportation can potentially present a major issue, the company offers a shuttle service to take people from home to work.

“The managers at LSG Sky Chefs are terrific,” said Mohamed. “They are welcoming, culturally sensitive, and encouraging to newcomers. They are committed to making sure people are successful on the job.”

Natoli works midnight to 10:30 a.m. and takes the Metro Transit Light Rail transit to work from his transitional housing at Mary’s Place in downtown Minneapolis. After sleeping during the day, Natoli is busy with his young children (he and his wife welcomed their fifth child in mid-November).  To improve his language skills, Natoli takes ESL (English as a Second Language) classes weekly.

This article appears in the December 2016 issue of the Rise Reporter.

This article appeared in the December 2016 issue of the Rise Reporter.