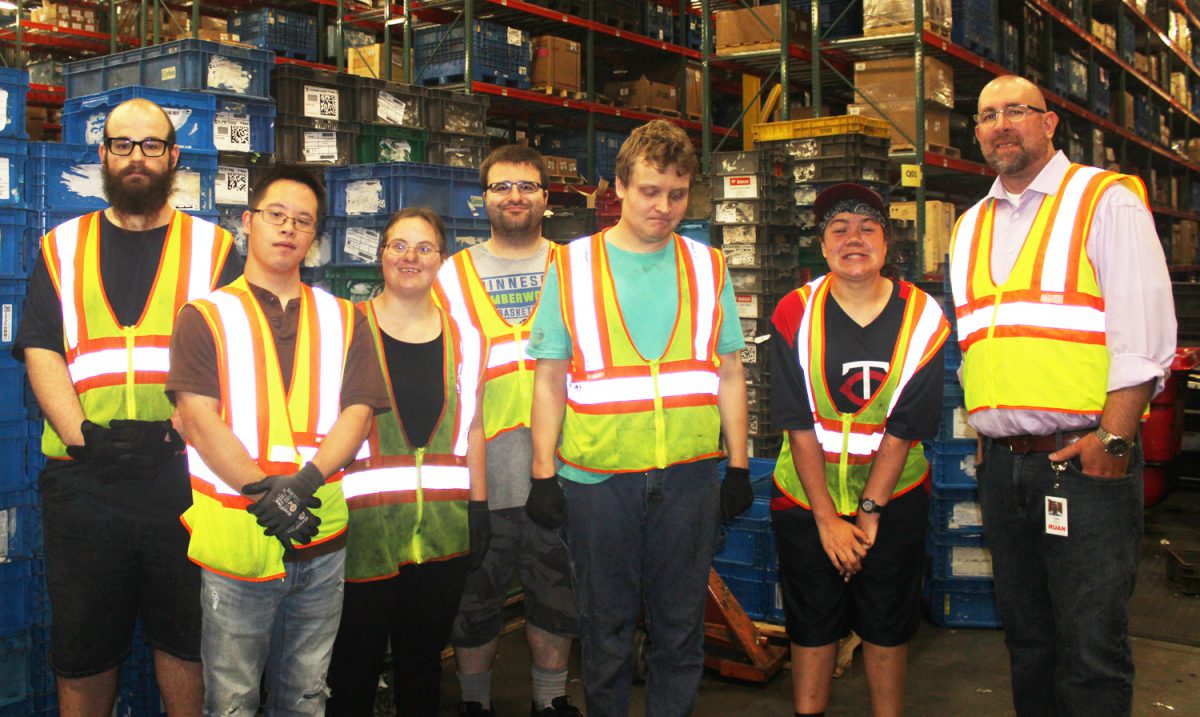 It wasn’t long after Todd Peterson started his new position as warehouse manager for Ruan’s Otsego facility in the spring of 2018, that he called Rise’s Sales Representative Nancy Hoff. He wanted to see if they could put a team of people from Rise to work.

Todd had worked at Cummins Power Generation for 14 years where Rise teams are employed on many different kinds of jobs in various work areas throughout the Fridley plant. “Michelle Imdieke, director of Global Logistics for Cummins, gave me a piece of parting advice: Find a way to work with Rise in my new position at Ruan.

“As I walked through the Ruan warehouse, I kept looking for opportunities to bring in Rise people,” Todd remembered. “I suggested to Nancy that we start in the ‘repack’ area and go from there. She put together a great team for me rather quickly and we have since expanded into our tote cleaning operation.”

The Otsego Ruan facility is a third party logistics provider which stores raw materials and finished goods for its customer, Bobcat, an international manufacturer of compact construction and excavating equipment and attachments. It’s a massive operation with 48 loading docks and 36 semi-trailer trucks per day going to Bobcat manufacturing sites.

Todd works closely with Mike Jorgenson, Bobcat’s on-site warehousing leader. “When I told Mike about wanting to bring in a team from Rise, he was all onboard right from the start,” Todd noted. “It’s been a great three-way working partnership.”

In the repack operation, workers count out small parts from large containers and repack them into smaller containers which are then used in Bobcat’s production process. In another area, they clean product totes inside and out, removing all informational and shipping labels so they can be reused for packing parts.

Rise Site Supervisor Chris Dittmer keeps the work flowing smoothly. The six-person team is busy from 7 a.m. to 1 p.m., Monday through Friday, ensuring that all three shifts of Ruan workers are supplied with repacked containers and clean totes.

The Rise workers enjoy their jobs, work hard as a team, and are proud of the good work they do to contribute to Ruan’s overall operations. Mike and Todd hope to expand the number of Rise workers this fall on a new packing and kitting project they are currently installing.

“Ruan is a great place to work and we appreciate this business partnership very much,” said Nancy. “Mike and Todd always take a positive approach to their operations and our workers feel part of their team, valued and appreciated for the good work they do.”

Ruan and Bobcat employees are great supporters of Rise in many ways. For instance, they raised funds for Thanksgiving holiday dinners last year. Through the generous and extraordinary efforts of Cummins Power Generation, Ruan, and Bobcat employees, they were able to purchase and put together the groceries necessary to create nearly 500 meal kits which were distributed to people Rise supports as well as food shelves across the Twin Cities area, bringing much holiday joy and comfort to so many people.

This article appears in the September 2019 issue of the Rise Reporter.

John meets the huge challenges of starting a new life over in Minnesota
November 23, 2020

Meyer’s long journey to recovery leads him to serve others who are struggling with addictions in many ways
August 11, 2020
) -->