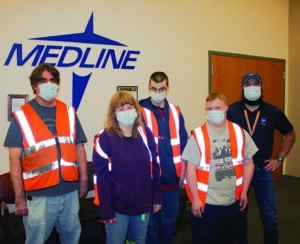 The next time you pop in for an annual health screening or even schedule a surgery, think of a team of five Rise workers at a warehouse in Rogers, Minn. who make that visit possible.

For more than a year, the team has worked at Medline, a medical supply manufacturer and distributor that supplies the nation’s heath care facilities with a wide array of supplies. It’s an essential job during an ongoing pandemic that has put public health front and center across the country.

“We’re behind the front line,” said Paul Gaffaney, director of operations at Medline. “Without us there’s nothing a nurse or doctor can do without the supply. And the Rise group are part of that service we provide to the community.”

Rise teamed up with Medline in the middle of the pandemic. Gaffney said our representatives were receptive to the company’s needs, creating a new supported employment team tailored to Medline’s goals. And most importantly the group was able to take on the job quickly. “Since then, we
haven’t looked back. It’s been a great relationship,” he said.

Five team members and their support professional, Melissa Pavek, have two crucial warehouse roles—they build boxes items will be shipped in, and clean shipping bins earmarked for hospitals.
In total, they build and clean thousands of boxes and bins daily.

“Melissa and the team do an awesome job taking care of it,” Gaffaney said. “We never have a shortage of totes or boxes. It’s just taken care of because the team knows.”

Chris Krause is one of the team members responsible for making sure the work gets done. He has worked at other production facilities and says he’s found the perfect prescription for success at Medline. “I like working here,” Krause said. “It’s a clean place to work. I want to work here.”

The warehouse ships more than 8,000 orders per day. Gaffaney says the Rise team’s work is essential to the operation’s success. And he believes their presence in the Medline workforce has benefits too.

“It’s always good to have them come in with smiles on their faces and see they are excited to work. There’s a high sense of accomplishment of the work the Rise team is doing.”