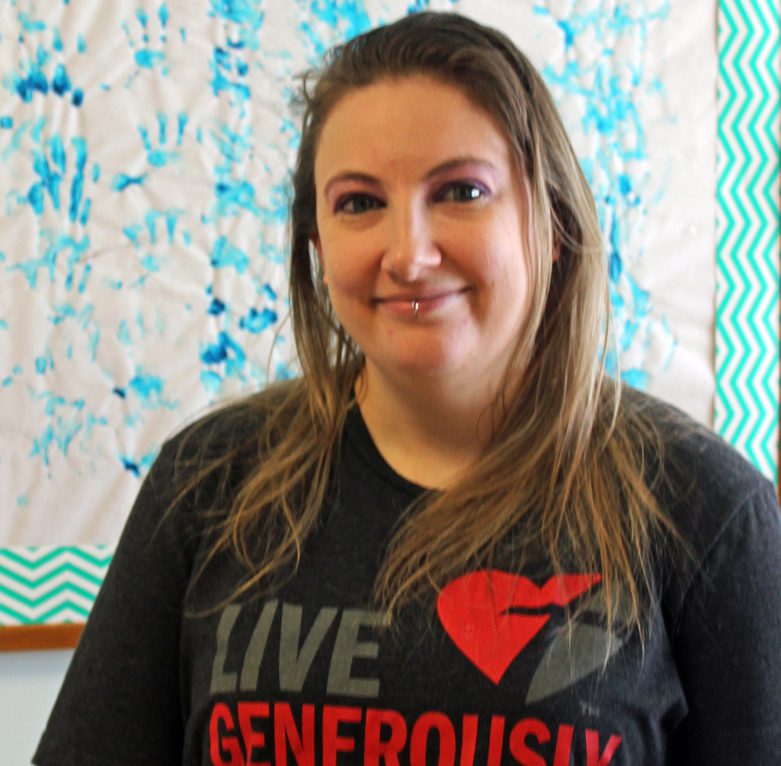 It’s a toss-up as to what is the best thing about LeeAnne Brown’s job as a teacher’s aide — working with “the best people on the planet” — OR — caring for “pure, innocent little babies who depend on you and connect with you in a wonderful way.”

Pick either one and you’d be correct. LeeAnne works at the Midtown YWCA’s Sage and John Cowles Childrens’ Center in Minneapolis helping care for ten babies, ages birth to 16 months old.

“Each of the little guys has a big personality – I’m on ‘cuteness overload’ all the time! I just love snuggling them, nurturing them; it’s a really rewarding job.”

LeeAnne was referred to Rise in 2017 for employment services by her therapist at Hennepin County Mental Health Center (HCMHC). She wanted to work with children and so Employment Consultant Lori Clauson with Rise’s Creating Access program set up a two-week job-tryout through East Side Neighborhood Services funded by Minnesota Vocational Rehabilitation Services.

“That went really well,” Lori noted. “So the next step was to get LeeAnne signed up at the YWCA for free classes for people who are interested in child care or early childhood education. She started doing the practicum portion of her classes at the Midtown YWCA and they were so impressed with how well she connected with the babies and her responsible work ethic, they hired her after only a month!”

“This is the career I want and I couldn’t ask for a better opportunity to work with such wonderful people in a job that I love so much,” LeeAnne said. “It’s so nice to work at a place where they appreciate you.”

LeeAnne said she began “slowly working on [her] stuff” in January 2014 when she found out she was pregnant. “Now I had a reason to change, something important to live for. My son was truly a sign of hope for me.”

LeeAnne describes her three-year-old son Lee proudly as a “happy little guy who is so outgoing and always out there making new friends.”

Through HCMHC, LeeAnne was able to connect with the right people. She juggles her part-time work schedule with support groups and therapy sessions at HCMHC which she says are very important to her. LeeAnne is also taking classes at the Y to complete the education requirements for a Child Development Association (CDA) certification in early childhood education.

“I have been working really hard the past few years to stay focused and follow through on my goals,” she said. “I am so grateful to everyone who has supported me. Lori helped me set goals for my career and then figure out how to get there. There were times that I thought my goals were out of reach, but Lori made me stick to them because that’s really what I wanted to do. She believed in me.”

LeeAnne is looking forward to spring and being able to take her son and niece whom she helps care for to local parks for outdoor fun as well as special places like Minnehaha Falls and the Minnesota Children’s Museum in downtown St. Paul.

“I want people to know that it’s never too late to start over with your life,” said LeeAnne. “And the great state of Minnesota, with all its good people and supports, is the best place to start over in. You just need to surrender.”