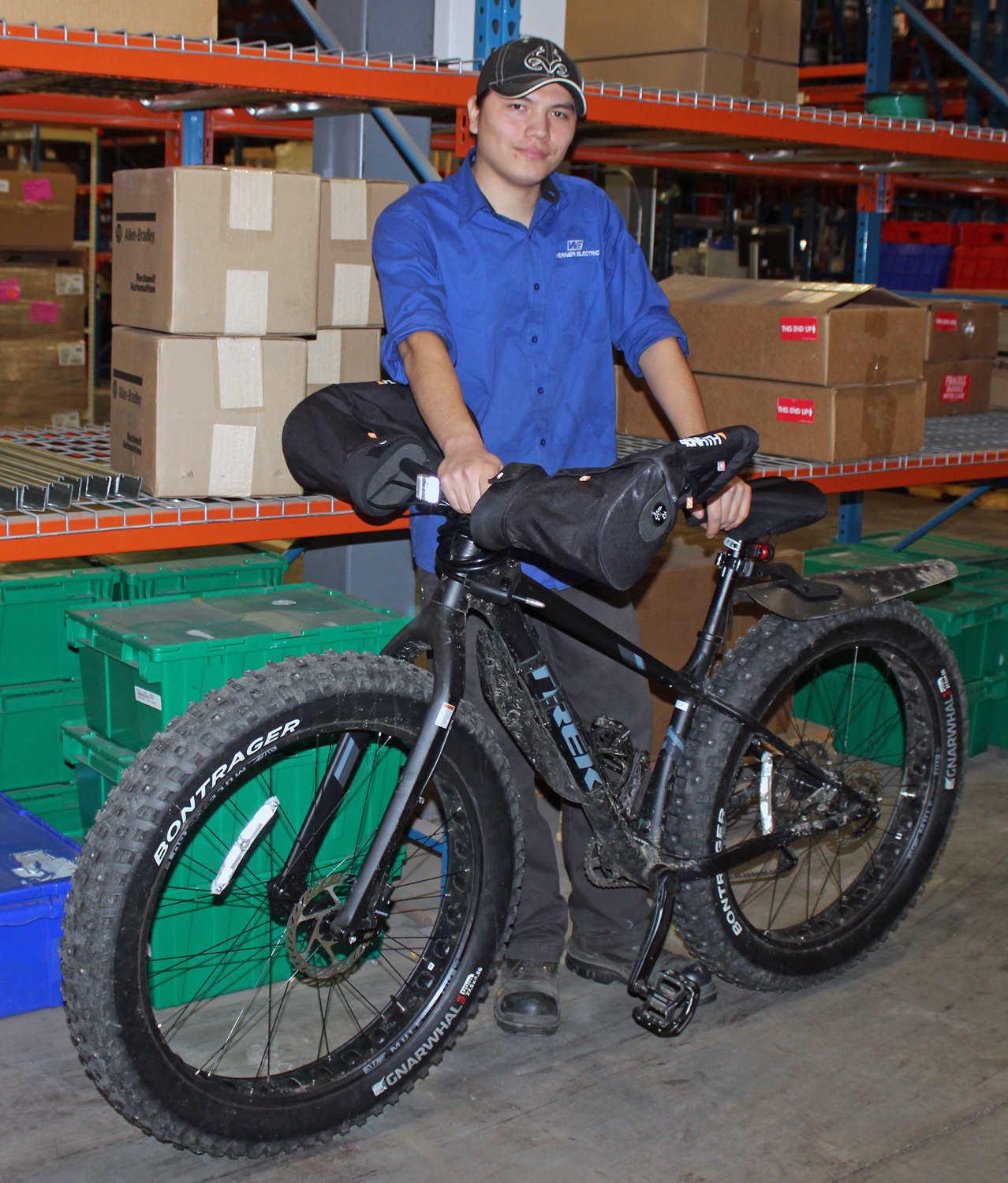 Minnesota is well-known for its extremes in seasonal climates – hot and humid in the summer and C-O-L-D in the winter. But neither end of the weather spectrum keeps Jaron Garland from riding his bike to Werner Electric’s distribution center in Cottage Grove where he does both maintenance work and strips copper wire.

It can take up to an hour to ride the 4.3-mile trip into work because Jaron’s got an uphill route. Returning home at the end of his work day, he has an easier 20-minute downhill run which he appreciates.

“My legs are in great shape!” Jaron said with a laugh.

Jaron was at the Minnesota State Fair a few years ago with his uncle where they visited a Fat Bike vendor’s booth.

“I liked the looks of it, and because I don’t have a car, I thought it would be great for getting around. So I saved my money to buy one.”

At close to $2,000, Jaron’s Trek Farley Fat Bike was a gem. He had it for two years before it was stolen outside a convenience store when he stopped to buy a snack. It was devastating.

Jaron went back to riding the bus while he worked hard to save for another bike. His employment consultant, Sean Hamilton, helped Jaron check with the police and local bike shops, as well as monitored online selling sites to see if his stolen bike showed up, but to no avail.

After saving up for about six weeks, Jaron was almost ready to purchase another bike when one Friday afternoon, his warehouse and wire team co-workers presented him with a new Fat Bike of the exact same model! They had quietly taken up a collection among themselves; Werner senior managers topped off their generous donations to help reach the purchase price goal.

“Jaron is a team member who demonstrates a lot of the Werner core values,” said Distribution Center Manager Mark Edmonds. “He works with integrity and collaboration, and is always striving to deliver excellence. Some of the team members he works closest with felt he was someone who deserved some better luck after his ‘pride-and-joy’ was stolen. They wanted to help Jaron continue to succeed, which is why it was so easy to sell the idea of a crowdfunding exercise.”

Stunned, overwhelmed, and grateful for his co-workers’ kindness and generosity, Jaron could not describe how much he appreciated their gift.

Jaron recently added studs to his tires to help him maneuver safely on the ice that is bound to come with a Minnesota winter as well as warming mitts on his handlebars for his hands. “I also dress in layers,” he said as he pointed out his massive pile of riding gear.

This article appears in the December 2018 issue of the Rise Reporter.