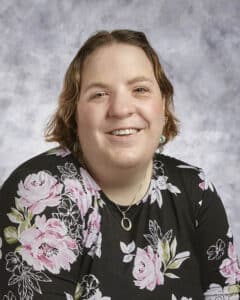 Ally Dukek often talked about working with children. Yet childcare is a competitive industry with a
particularly high number of obstacles, especially for people with disabilities. Barriers can include bias,
discrimination, and technical challenges, among others.

At first, Ally’s mother, Lori Dukek, was hesitant about her daughter’s interest in childcare. She worried Ally wouldn’t be supported or accepted in the ways she deserves. But Ally was persistent, and eventually received her first position in childcare. Her first job wasn’t the right fit, and the childcare center was not accommodating. Eventually, her hours were cut.

But Ally didn’t give up. She persisted and soon began work at a new childcare facility. Ally is now at a place where coworkers and supervisors welcome her. She is valued, respected, and fulfilled by following her passion.

Q: What concerns did you have about Ally exploring a competitive position?

A: “I never doubted Ally herself- I knew she had the skills to be in a competitive field. What I really doubted was whether she would be able to find a working environment that supported her and accepted her. Unfortunately, some people are simply not comfortable around people with disabilities, and that makes finding a good environment really hard.”

Q: What was the job search like for Ally?

A: “Ally’s Work Consultant, Sarah Gustafson, helped Ally out with finding positions and interviewing. Sarah was really pivotal in Ally finding the job she’s in now.”

Q: What challenges did Ally face, joining in a competitive role?

A: “I wouldn’t say that she found a perfect fit right away. She worked for some people who just weren’t very understanding of her needs. The people she works for now are a lot more understanding and accommodating, but there were still certain barriers that made it hard for her to get there. One thing she faced was the CPR and First Aid training requirements. They couldn’t really make any additional accommodations for her, so she had to pass them on her own. I think Sarah helped a lot with that, and helped Ally get through the certifications she needed.”

Q: You must be really proud of Ally?

A: “Yes, her persistence has really paid off. She’s worked hard, and now I think she’s working somewhere that makes her really happy and accommodates her needs.”

Q: What advice do you have for families who are exploring competitive employment?

A: “You know, I think a lot of it is trial and error. If one situation doesn’t work out, don’t give up. It might not be your loved one’s limitations that’s slowing them down. It might be the limitations of society just not being comfortable yet with people with disabilities. I think that most of the time, in the right work environment, people with disabilities can do any kind of work they want to. It just has to be the right fit.”