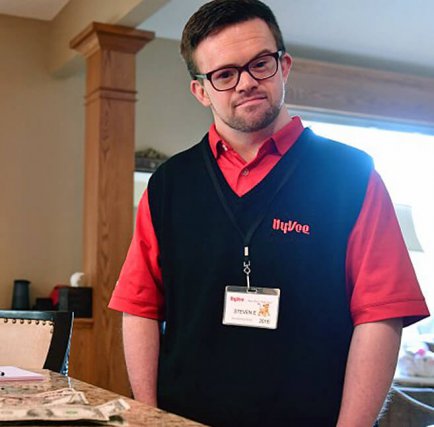 Steven Eull is an independent, busy, hard-working guy who was recently featured in the St. Paul Pioneer Press for his compassionate generosity.

Before Rise had to close Rise Stillwater due to the COVID-19 outbreak, Steven worked three mornings a week there on subcontract production work before taking Metro Mobility to his job at the Target store in North St. Paul. He works afternoon shifts stocking and facing shelves, restocking returns, cleaning the front reception areas, and restocking the spills stations throughout the store.

Steven also works part-time as a courtesy clerk at the HyVee store in Oakdale, primarily assisting customers by bagging groceries.

Kelly Klinke, a Rise employment consultant in Cottage Grove, supports Steven at his three jobs. “He never fails to wish each and every customer a wonderful day. Steven is a polite person and his move to share his piggy bank to help support others in need does not surprise me.”

Following is, in part, an article posted in the  Pioneer Press on April 9, headlined: This St. Paul man is among the grocery workers still showing up for work during the pandemic, but he wanted to do a little more

Steven Eull has been working both his jobs at Hy-Vee and Target through the COVID-19 outbreak, but the 35-year-old St. Paul man still doesn’t feel like he’s doing enough.

So earlier this week, Steven, who has Down syndrome and lives with his mother, dumped the contents of his piggy-bank out on his kitchen counter and started counting.

Then he jammed all the coins and bills he’s collected in tips bagging groceries into an envelope, wrote “President Trump” and “Congress” on the front with “For all the people to help with coronavirus” underneath, and told his mom, Patsy Eull, he plans to send it off.

Crammed with coins and lacking an address, Patsy suspects it won’t get far. But she plans to write a check for the amount — about $28 — and send it off herself.

She shared the story with the St. Paul Pioneer Press Wednesday morning, saying it was a bright spot amid lots of bad news, adding that Steven is an avid newspaper reader.

That’s how he’s been staying abreast of coronavirus news.

“So he knows just enough at this point to be a little dangerous,” Patsy joked. “He is just obsessed with it and very concerned about all the people.”

She was getting dinner ready when Steven plunked down his piggy-bank, which is shaped like a chocolate bar.

Math is a challenge for Steven so it took him about an hour to sort the coins into various piles, Patsy said, adding that his count was off by about $1,000.

“This is coming from a young man who makes about $600 a month, but is willing to give everything he has to help others,” she wrote in her email describing her son’s gesture.

While heartwarming, Steven’s plan didn’t surprise his mother, who said the young man is known for his generosity and kind heart

“I just retired from 3M after 40 years and he was all bent out of shape because he couldn’t have a retirement party for me (because of the pandemic), so I come home on my last day and there is this big sign on my door that says “Happy Retirement Mom,” Patsy recalled, adding that he also never fails to have a Starbucks coffee waiting for her when she picks him up from his job at Hy-Vee because he knows she loves coffee. There is a location inside the grocery store.

“It’s just those little things. He is just very thoughtful.”

Sports and work are two of his great passions, his mom said. While [Special Olympics] sports have stalled amid the pandemic, Steven has continued to happily go to work uninterrupted despite his awareness of the risks.

“He says he wants to have a victory because they keep saying this is a war against a hidden enemy so he wants a victory and more donations,” Pasty said. She added that he’s particularly hopeful that the money will help speed up vaccine trials so one can get developed sooner. Vaccines are something the two have talked a lot about lately.

He also shared that the pandemic doesn’t scare him, personally, but he does fear for other people, and said he hopes the number of those infected will start coming down soon.

In addition to his piggy bank contribution, Steven said he plans to donate his next Target paycheck plus the additional earnings he makes when he gets a raise from the retailer for hitting his 10-year-mark in September.

“Do you think we are going to get through this,” he was asked at the end of the interview. “Yes, that’s right we are,” he said.