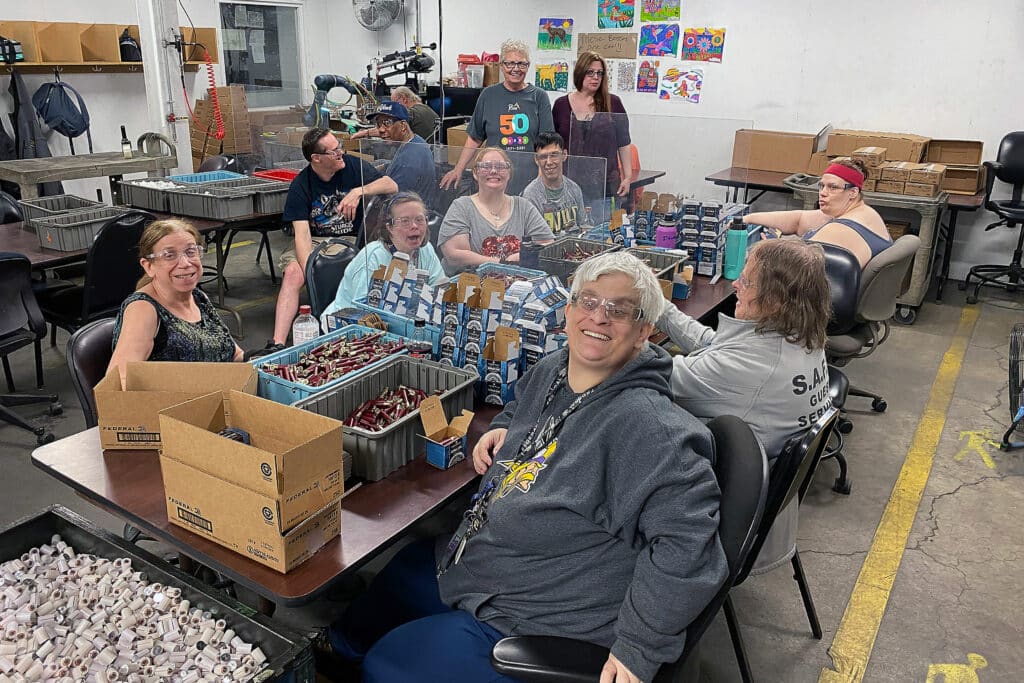 Our supported employment team takes a bread from assembly work at Federal Ammunition in Anoka. Federal is one of our longest-tenured business partners.

As Rise continues the celebration of our 50th Anniversary year, it’s so important to recognize the successful relationships we’ve built in our communities. Our decades-long partnership with Federal Ammunition began in 1987. It has endured, and as Federal celebrates its centennial in 2022, we went inside the Anoka facility to look at how a Rise team there supports Federal’s business.

Maria Nagle knows her way around a press. Much of the work she does each day, from assembling slugs to boxing cases of shells, is all done by hand. “We are still doing much of the same job. Before they had machines that would do some of the stuff, but we don’t do that anymore. It’s all pull-down.” Nagle says with a laugh. 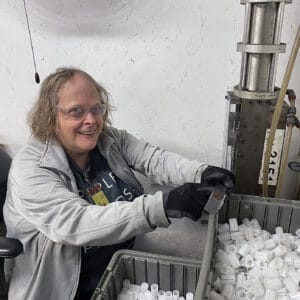 Maria Nagle operates a press at Federal Ammunition. Nagle performs the work by hand, something she’s been doing for 25 years.

She’s been at Federal for 25 years, making her one of the longest-tenured people Rise supports here. A group of about 15 people works in an assembly area for about five hours each day. The meticulous crew performs each task by hand.

“We can’t possibly pack as much as we have to pack, and your team is good and focused. We need someone to sort the defective pieces when we have quality issues. They find some of the hardest defects that most teams miss,” said Scott Collier, the Anoka, Minn. shotshell manufacturing facility manager.

The Federal team is running at total capacity. Collier says demand is at its highest in nearly 25 years working for the company and likely has not peaked. “Every plant in the company set a production record last year,” Collier said. 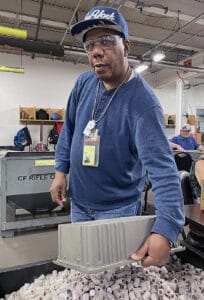 The Rise team packs a wide variety of shells. Each product looks different from smaller, 410 shots to 20-, 12-, and 10-gauge, so the team always knows the product. Their finished work supplies outdoor sports and shooting enthusiasts in the United States and worldwide.

Today Lynn Pipho is boxing 12-gauge shells. “10 boxes equal 250 per day!” she says. Pipho has worked at many other places but finds herself continuing to return to the team at Federal.

“It’s closer to home, which I like,” she says. “I do boxing and packaging and other stuff. It’s different every day.” And she can continue to work here, despite some recent mobility issues, which makes her happy.

As one of our longest partnerships, it’s no surprise that Federal Ammunition is celebrating its own milestone. The company turned 100 in 2022. Collier says it’s more than just a company milestone.
“My family has been here since 1960. My grandma worked here, my dad worked here, and so many other family members. Federal has been the reason Anoka has been able to grow. It is huge for the community of Anoka and the people of Federal.”

The company’s humble Anoka beginnings eventually led to the development of thousands of specialized, high-quality shotshell, centerfire, and rimfire loads for hunters and shooters. Federal is among the most trusted ammunition due to quality control processes. Our Rise team’s quality control work contributes to their reputation.

Their work is important to them. But, the experiences and the relationships they’ve built with their teammates keep long-time workers like Maria Nagle coming back each day.